Campofilone is a small village built in the middle ages immersed in the hilly Marchigiana countryside, worldwide famous for its "maccheroncini" a traditional handmade pasta. Rich in history and tradition, this village has created an ancient and modern atmosphere in one. Being situated in a clean seaside area it has become a considerable touristic vocation a rare beauty with the countryside and the hilly panorama.
Campofilone is in the province of Ascoli Piceno, which is surrounded by amazing villages rich in style and hospitality. 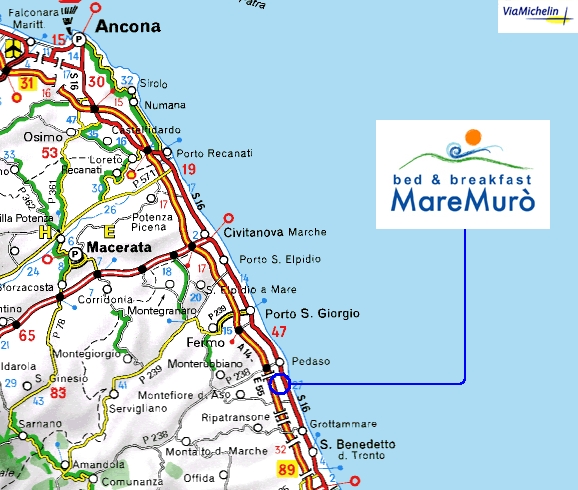 Campofilone: within 30 minutes by car, you can reach the mountains in the National Park "Monti Sibillini" a pollution free protected oasis. By car:
Travel along the A14 and exit at Pedaso, continue for about 2,5 Km south.

San Benedetto del Tronto:
With more than 8,000 palms this definitely an exotic scenery, which is why its also named Palm Riviera, a city full of nightlife for all tastes.

Ascoli Piceno
Truly a city of extraordinary beauty. From the Roman and Gothic remains to other History of art this place never finishes in reserving surprises, especially in the well known Peoples square "Piazza del Popolo".

Fermo
Ancient and Noble, this city is founded well before the Romans, today it is a city renowned for its culture and study, rich in art and monuments.

Loreto
Its one of the main centre of Christianity and inside its Basilica you can find the house of the Virgin Mary. Loreto is a very romantic place and its architectural aspect is so striking. Distinguishing its self with sixteenth-century bastions, fortified towers and walls that wind around the shrine of Nazareth.